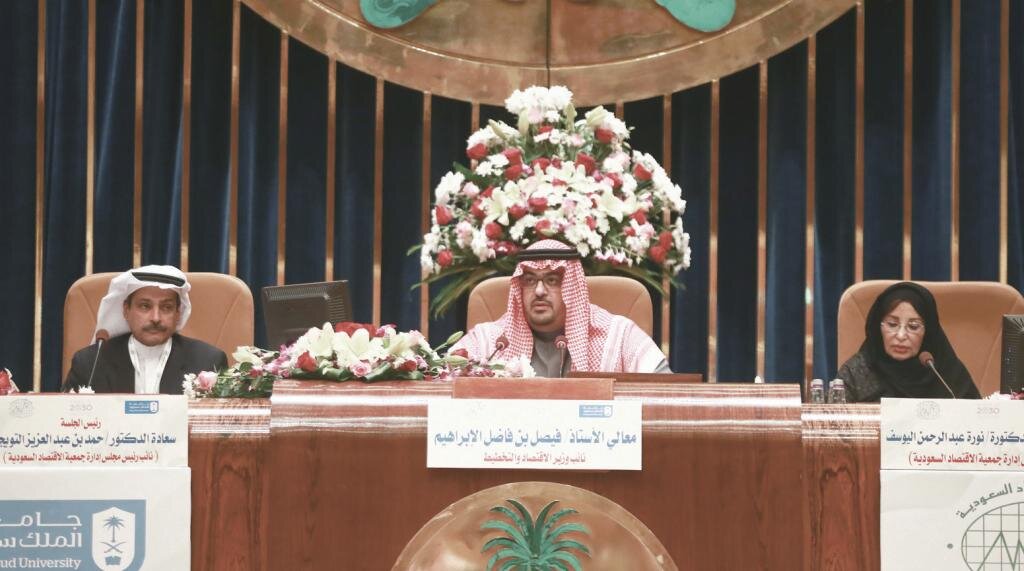 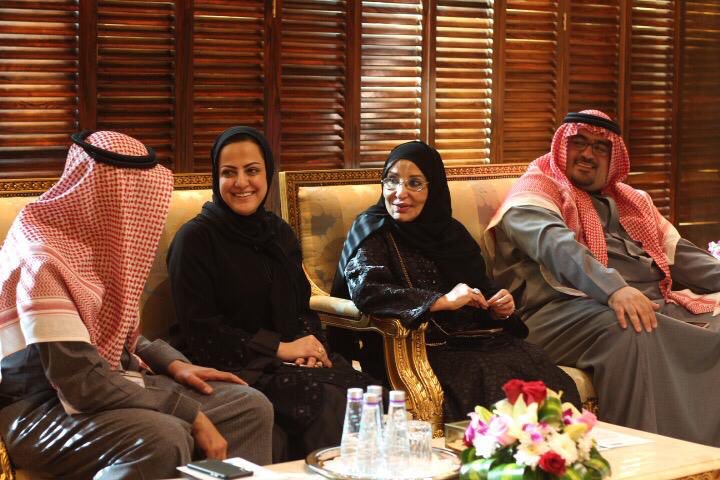 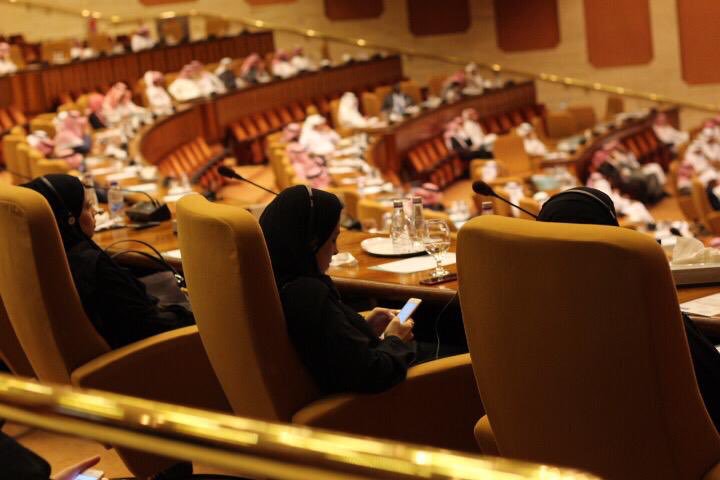 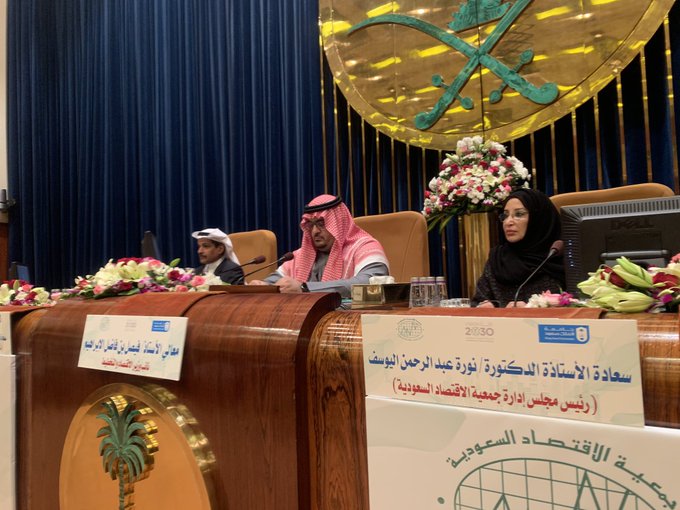 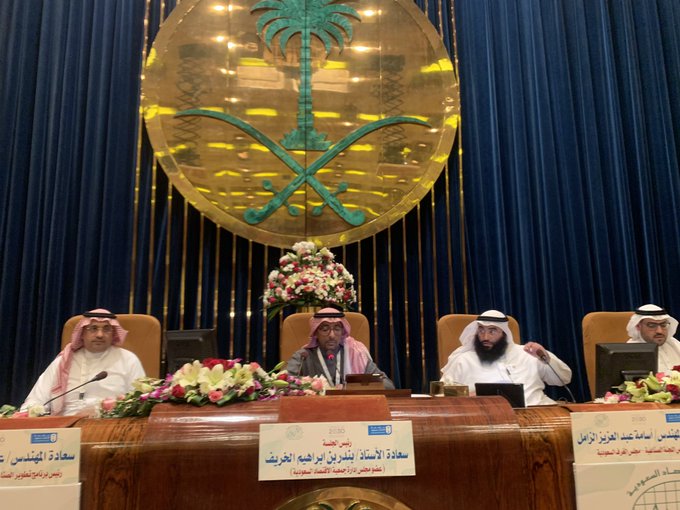 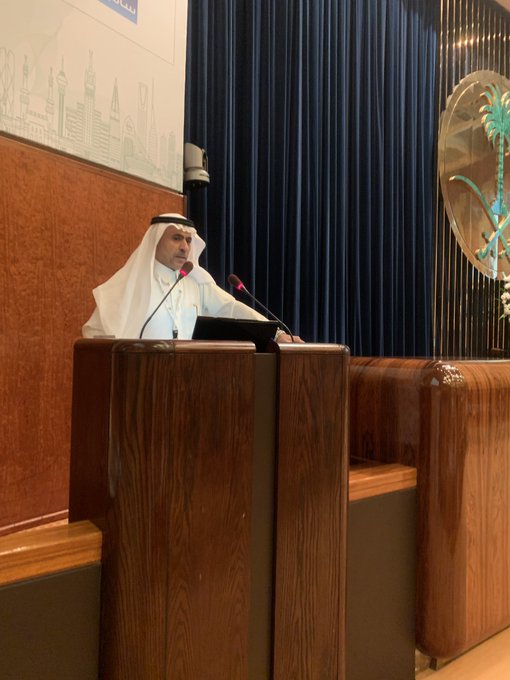 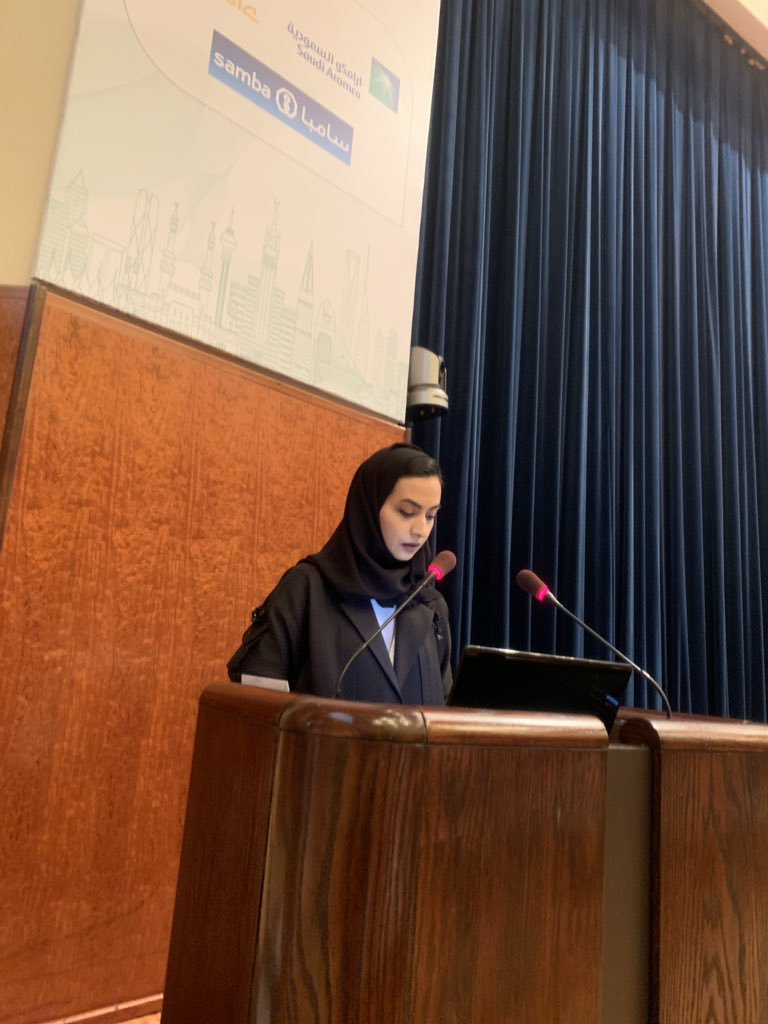 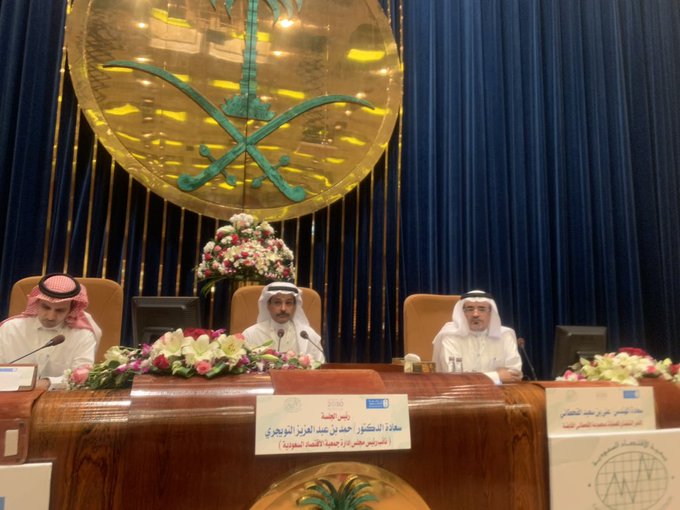 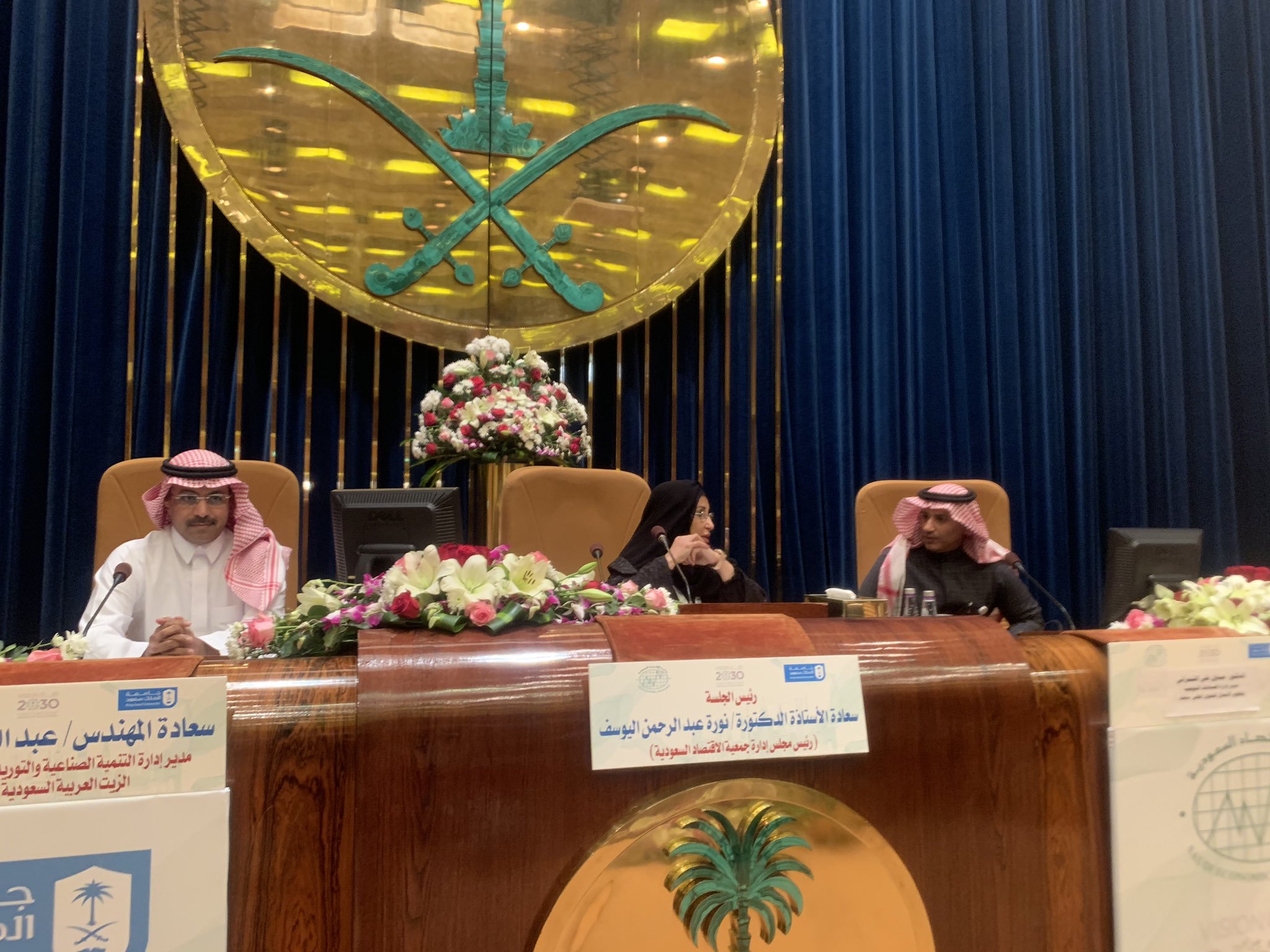 The Saudi Economic Association organized its 20th annual meeting, which discussed “The Saudi Economy: Competitiveness and Efficiency”, under the patronage of His Excellency the Minister of Economy and Planning, Mr. Muhammad bin Mazyad Al-Tuwaijri, at the King Faisal Conference Hall at the Intercontinental Hotel in Riyadh.

The institute’s ceremony on this occasion began with verses from the Holy Qur’an, followed by a speech by His Excellency the Deputy Minister of Economy and Planning, Mr. Faisal bin Fadhel Al-Ibrahim, during which he explained that the Kingdom’s economy depended, in the pre-oil discovery phase, on basic resources such as agriculture, local and foreign trade, and during Hajj and Umrah periods in financing the budget Then came the discovery of oil during the reign of King Abdul Aziz bin Abdul Rahman Al Saud – may God have mercy on him – in the city of Dammam in 1938, where revenues were collected from American oil companies, and Aramco was established, thus achieving remarkable achievements and a qualitative leap for the Kingdom.

And he indicated that the Kingdom has recently faced many economic challenges, especially after the significant drop in oil prices at the beginning of 2015, which resulted in taking many economic reforms necessary to confront them. In 2016, an ambitious and unprecedented national vision was launched to transform the Saudi economy from an economy that depends Oil depends mainly on a diversified economy in which the private sector has an active and productive role, an engine of employment and a source of prosperity for the nation and well-being for all.

He indicated that the Kingdom’s vision gives hope for further development and creativity for a new transformational stage after the discovery of oil, which aspires to achieve ambitious goals in various fields, including economic goals such as: raising the percentage of non-oil exports from 16% to 50% of non-oil GDP, and reducing the unemployment rate among Saudis increased from 12.8% to 7%, with the challenge of increasing the number of graduates by 250 thousand male and female graduates per year, as well as the contribution of the private sector to the GDP from 40% to 65%.

Al-Ibrahim added that many economic reforms have been carried out aimed at enhancing the work of the Kingdom’s Vision 2030 programs, raising the status of the Kingdom and raising the level of performance in various economic and social sectors in general, including developing legislation and the regulatory environment, working on stability and clarity of financial policy, enhancing transparency and governance, and stimulating the sector’s contribution. private sector, creating new areas for investment, raising the efficiency of government sectors, protecting intellectual property rights, providing public services and focusing on raising their quality, which in turn will contribute to raising productivity, efficient human capital, and developing an attractive investment environment.

His Excellency the Deputy Minister of Economy and Planning said: Guided by what the Custodian of the Two Holy Mosques King Salman bin Abdulaziz Al Saud – may God protect him – said, “that our country should be a successful and pioneering model in the world at all levels, and I will work with you to achieve this.” The Ministry of Economy and Planning has focused On the economic policies that contribute to achieving this lofty goal by working to address the structural challenges of the labor market, ways to improve the balance of payments, and achieve sustainable growth of the gross domestic product, while ensuring the holistic impact at the level of sectors and regions, and the distributive impact, and the ministry will continue to raise views and recommendations for the Council of Ministers and for Economic and Development Affairs, issuing macroeconomic indicators, estimating the expected economic impact from the implementation of the vision programs, evaluating and following up the performance of the national economy when implementing these programs, and making recommendations that help improve their implementation by various means and means, which will contribute to raising the efficiency of the Kingdom’s classification on all levels.

He stressed that all government agencies, institutions and individuals of the Kingdom have a major role in achieving the Kingdom’s Vision 2030, through partnerships and the exploitation of the ambitious human capital of Saudi society.

After that, the Chairman of the Board of Directors of the Saudi Economic Association, Dr. Noura bint Abdul Rahman Al-Yousef, gave a speech in which she welcomed the attendees, indicating that the association realized the importance of such meetings and periodic activities, and focused on paying attention to important economic issues through holding meetings, lectures, seminars and workshops that shed light on economic variables. The current situation and how to deal with it, in harmony with the efforts made by the government of the Custodian of the Two Holy Mosques King Salman bin Abdulaziz Al Saud and His Highness the Crown Prince – may God preserve them -.

She stressed that the economy sector is one of the issues that concern citizens, and the Kingdom has paid great attention to all aspects of the economy, and has endeavored to establish a strong economy in which everyone enjoys prosperity.
During her speech, she addressed the Kingdom’s Vision 2030, which includes goals and programs that will diversify the economy’s resources, advance the global competitive situation, raise efficiency in the areas of production and support growth and development in all sectors. The vision, and hence this meeting entitled (The Saudi Economy: Efficiency and Competitiveness), as a step to follow the steps to achieve Vision 2030, which included restructuring the government sector and establishing the necessary units and programs that work together under the supervision of the Council of Economy and Development and the Ministry of Economy to achieve these goals.
After that, the sessions accompanying the 20th annual conference of the Saudi Economic Association began.

Part 1 of the 20th Annual Conference’s video on Twitter

Part 2 of the 20th Annual Conference’s video on Twitter